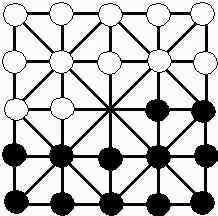 Each player had twelve pieces places as in the illustration above. Pieces move on space at a
time following the lines. To capture a piece you must jump over it (like in checkers). Multiple
captures are possible, and mandatory. If you could have caught a piece, but did not, this is a
huff. If your opponent notices the huff, he can remove your piece that should have jumped. Play
ended when one player lost all their pieces.

The ancient game of GO

The ancient game of GO

The true origins of the game (called Weiqi in China, Baduk in Korea, and often called iGo (ee-go) in Japan) are lost in the mists of time. Many believe the game was created as a teaching tool after the ancient Chinese Emperor Yao (2337-2258 BC) designed it for his son, Danzhu to learn discipline, concentration and balance. Other believe it was the invention of Chinese warlords and generals, who used pieces of stone to make attacking positions. Some believe it was used for astrological divination.

The game is played on one of 3 board sizes: 9x9, 13x13, and 19x19. Unlike many board games, the pieces are played on the intersecting lines rather than in the squares. So a 9x9 board is 9 points long, and 9 points wide for a total of 81 points to place stones on. The Largest board, 19x19 has 361 points (including the sides) which also happens to be the same number of days in the ancient Chinese calender. A 19x19 game takes about 1 hour to play, a 13x13 takes 30 minutes and a 9x9 is about 15 minutes.

The objective is to surround more empty points, known as Territory, on the board than your opponent. 2 players take turns placing black and white stones on the intersecting points on the board. Black always goes first. A stone is “captured” when it has no empty points (Liberties) next to it. Two or more stones of the same color share their liberties when the are connected. Captive stones are removed and kept by the opponent. Each prisoner is worth 1 point. Each empty point of surrounded territory is worth 1 point.

A stone cannot be moved once it has been placed, unless it is captured and removed from the board. A stone cannot be placed on a point where it has no liberties, unless doing to captures enemy stones. A stone cannot be placed on a point that repeats the same move infinitely. A stone must be played elsewhere before repeating the previous move. Since black always plays first, white gets extra points to offset this advantage called “Komi” points. Komi is a recent change to the game, less than 2 centuries ago. At first it was 4.5 points, but increased over time to 5.5 and finally to 6.5 for a full 19x19 game. Before then white received nothing, and was always at a disadvantage.

No two players have exactly the same skill level. So in order to make a game between a stronger and weaker player more fair, handicaps may be used. The stronger player plays white, and the weaker player plays black. Black is given additional stones at the start of the game to offset the difference in strength. In the international world of GO, player's strength is represented by a rank number. There are 2 tiers, Kyu and Dan. Kyu starts at 30 and decreases as the player's strength increases. After 1Kyu comes 1Dan (Shodan) and then increases to 9Dan.  For every point of difference, Black should receive 1 extra stone. So a 15Kyu against a 12Kyu would get 3 stones, and a 2Kyu against a 3Dan would get 4 stones If you do not know your strength rating, playing an even game will determine what an appropriate handicap would be. For every 10 points (rounded down) that 1 player beats another by, 1 stone is considered fair. So if John loses to Jane by 30 points, John should get a 3 stone handicap to make it an even match.

While the game itself is ancient, its popularity today has never been higher. The internet has brought the game to a truly global level. With thousands of games being played by people all around the world every day, and it's popularization through the hit anime series “Hikaru No. Go!” international interest in the game has exploded. In Asia many countries are home to professional leagues, publications, Go salons, international amateur tournaments, training institutes, personal tutors and an ever growing fan base. In North America, The American Go Association (AGA) and the Canadian Go Association (CGA) are the authorities on the game. With hundreds of members, and tournaments organized both in person and online, both associations are leading the charge to spread the word and popularity for the game.

While there are many places you can play Go online, by far the most popular (and in my opinion the best) place is the Kiseido Go Server. You can learn more about the game, play against other players from around the world, play against computer AI opponents of varying difficulty, find out what your strength ranking is,  even participate in official tournaments held by the AGA and CGA for international rankings. And yes... There's an app for that. KGS provides a mobile version of their program Cgoban3 on google play for Android smartphones and tablets (Sorry iPhone users). There are also many other apps on all platforms that allow you to play the game against the computer AI known as GnuGo, the same AI used by KGS and just about everyone else for computer Go. Which allows you to set the difficulty level from pants-on-head stupid, to 9Dan legendary.
Posted by Todd H. C. Fischer at 10:26 AM No comments: