From the Italian bassetta, a card game also known as barbacole, considered one of the most polite pastimes of the quattrocento to seicento. It was intended for persons of the highest rank because of the great losses or gains that might be accrued by the players. This game financially endangered some of the great French houses and was banned by the King of France. 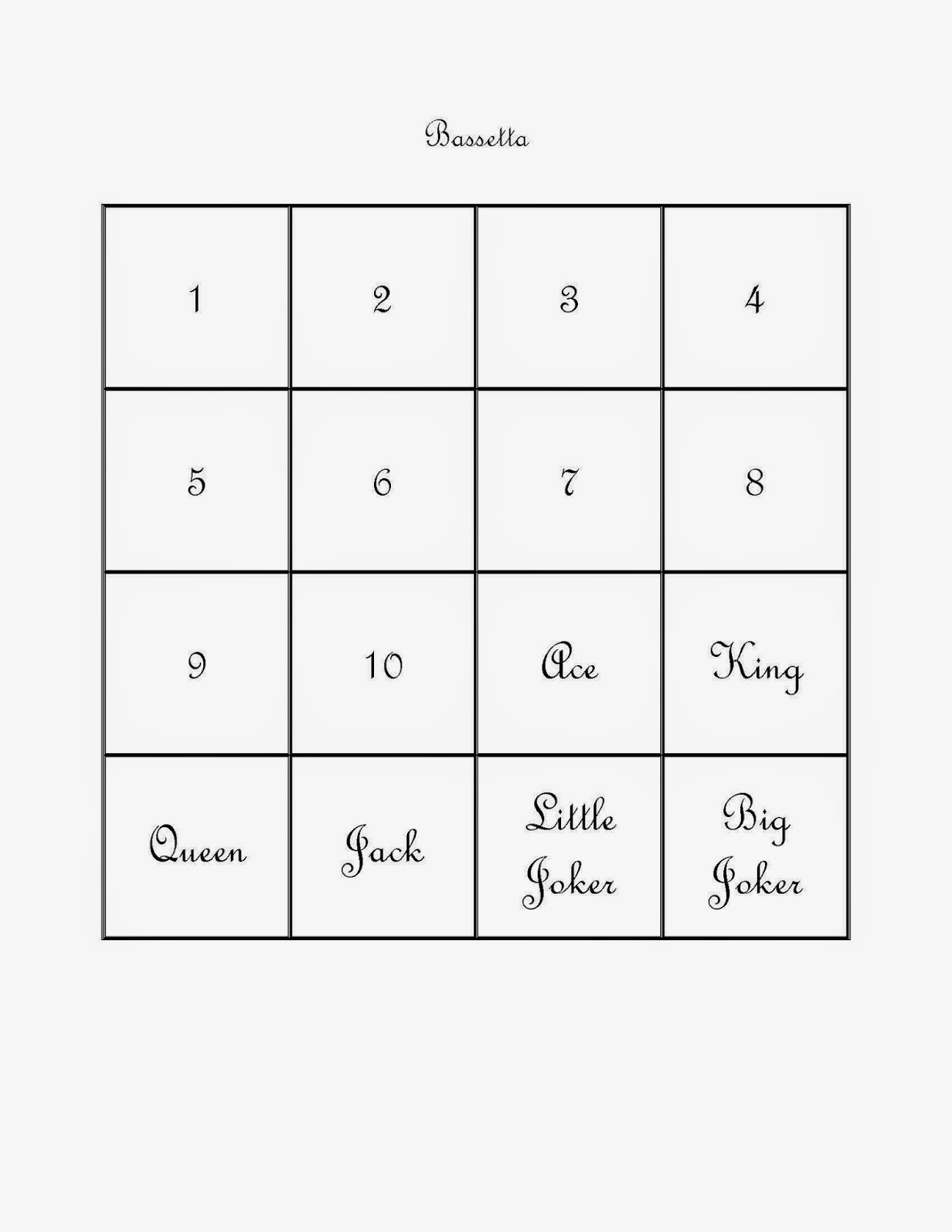 Basset is a banking game, with a significant advantage for the house. It is purely a game of chance.

One player is the banker.

The banker has a full deck of cards, well shuffled. Each punter, or player, has the 13 cards of a single suit of a similar deck in front of him, or perhaps a board with marks for the 13 denominations.

Punters put bets on their boards before play begins. Once all bets are placed, the banker turns up a single card from his deck (made up of multiple decks of cards**) and wins all bets placed on the denomination shown (suit is ignored). After the first card is turned up the banker turns up cards from his deck in pairs, putting them on two piles alternately, until all bets are resolved or the deck is exhausted. Denominations that match a card turned up on the first pile lose their bets to the banker; denominations that match a card turned up on the second pile win. The banker must pay equal to any winning bets. As with the first card turned up, the banker wins any bets that remain on the last card turned.

On any winning bet the punter may decline his winnings and let the bet ride in the hope of further winnings. If the same denomination shows up again on the winning pile, the banker must pay seven times the bet; if the bet is let ride again and wins, the banker pays 15 times; if it is let ride and shows up a fourth time on the winning pile the banker must pay 30 times the bet. Finally, if it shows up four times in one deal, the punter lets it ride into the next hand, and the same card shows up winners a fifth time, the banker must pay 60 times the bet. The decision to let a bet ride is marked by bending up a corner of the card it lies on each time (this is destructive of cards, so it is suggested that you use some other way to mark a riding bet).

Once a payment is declined by a punter (leaving a bet to ride) the punter cannot change his mind until the card shows up again on the winning pile, when he again has the choice of taking his winnings or letting it ride.

** One deck of cards is sufficient for 2 to 3 players, each additional deck allows up to four more players.

SOURCES
Complete Anachronist #4. Indoor Games, or How to While Away a Siege. SCA, Inc.
Partlett, David. A History of Card Games. Press.