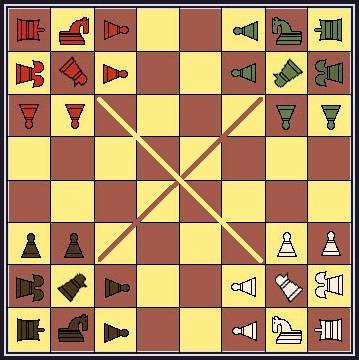 The following description is based on information from Murray's and Gollon's books. The original Spanish name for Four Seasons Chess is Acedrex de Los Quatros Tiempos.
As its name implies, the game is a competition between four players, each representing one of the seasons. Moreover, each player's colour represents one of the four elements and a humour. Green represents spring, air, and blood; Red represents summer, fire, and choler; Black represents autumn, earth, and melancholy; White represent winter, water, and phlegm.

Board and opening setup

The game is played on an 8x8 square board having two diagonal lines that cross the eight central squares. One diagonal crosses c3, d4, e5, and f6; the other crosses c6, d5, e4, and f3. Whether or not these diagonals influence play is not known. One may chose to ignore the diagonals or allow them to divide the board into fields which may not be crossed by any piece.

The opening setup is as follows:

When a pawn reaches its last rank, it promotes to a general. A general moves one square diagonally.

Green moves first and play progresses anti-clockwise (green, red, black, white). Both mate and stalemate constitute a loss. A mated player's king is removed and his pieces taken over by the mating player. All of astalemated player's pieces are removed from the board. The last remaining player wins the game.

A 6-sided die may be used to determine which piece a player may move. Rolling a 6 allows the king to move, a 5 the queen, a 4 the knight, a 2 the bishop and a 1 a pawn. When a move is not possible, the turn is lost. The game can also be played with two dice, which often allows the player to chose between two numbers. However, the diceless version of the game seems to be the more interesting.

A picture from King Alfonso's book 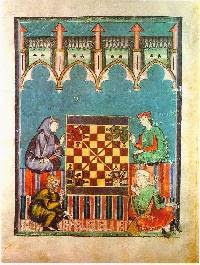 The following picture is from the Libro del Acedrex. Click on the picture to see it in larger size.

A facsimile of King Alfonso's book is available at EDILÁN (link).
Written by Hans Bodlaender. Edited by John William Brown.