We continue our trip on the shores of history but remain in Egypt.
This time let me introduce you to a game whose name and rules have also been forgotten among the mists of the past. It is known as the game of "Dogs and Jackals." We know of it by way of a famous boardgame found in an Egyptian tomb. It belongs to a family of games named "game of the thirty points" or "game of the fifty eight holes".

Many gameboards or pieces of gameboards have been discovered in Egypt but also in Palestine, Mesopotamia and Assyria. A very nice boardgame has been found in the tomb of Reny-Seneb, XII dynasty, about 1800 BC. This beautiful game in ebony and ivory, has the shape of a small piece of furniture. The gameboard is a rectangular (15x10cm) wooden box, put on four animal legs. The top in ivory is carved with a palm tree and fifty eight holes.


Schematic drawing of the gameboard. 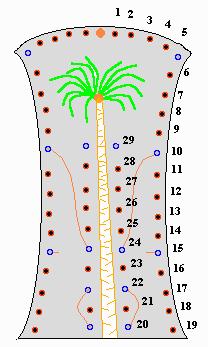 In the drawer within the box, ten pawns were found. They look like short sticks, five carved with a dog head and five with a jackal head. The pawns were placed in the holes of the gameboard, they certainly describe a trail that the pawns have to follow. Holes showings marks (15), circles, or inlays might have played a special role in the course of the game. Were the lines between 10 and 24, or 20 and 22 some shortcuts ?

Rules as Proposed by R.C.Bell

The game is for two players. Five dogs are given to one and five jackals to the other. You will need three pieces of money to use to determine movement. The goal is to reach the five points (25 to 29) on your side of the board and win the dates.

For the moves the conventions are: